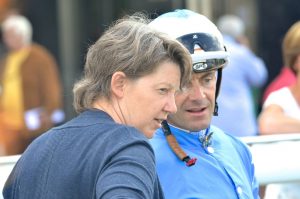 Gina Rarick has been training racing thoroughbreds in France since 2002, alongside her work as a journalist at the International Herald Tribune. In March of 2008, she decided to leave her career in journalism to devote herself to training full time.

The results are more than solid: 39 percent of her runners are in the money. Earnings per year have topped 200,000 euros for 9 consecutive years. Total earnings for the yard have surpassed 3 million euros!

RATES:
Training fees are €60 a day. That amount includes everything except shoes, veterinary and racing costs.

Learn more at our YouTube channel: Racing with Gina