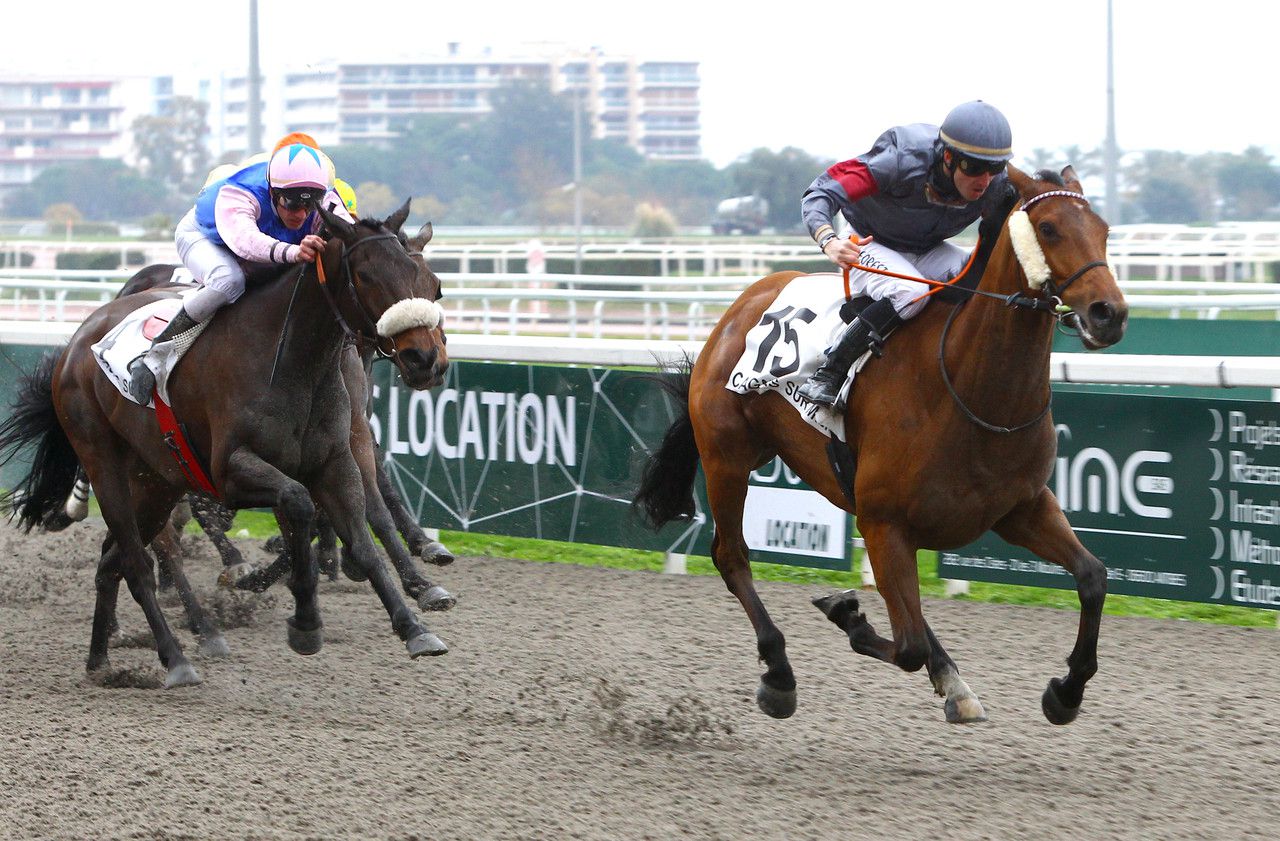 Quiet Zain (Youmzain) won the Prix d’Antibes Quinté handicap February 17, 2018, in Cagnes-sur-Mer. It was a first for him and for the yard.  Michael Forest placed him in perfect position behind the leaders and pulled out in the stretch with plenty of horse to leave the field behind.

QZ, as he’s known at the yard, had the perfect draw at 6 in the fifteen-horse field and was quickly placed behind the leaders, drafting number 13 – Fair Trade (Tertullian)  – who would end up with 5th place.

Video replay of the race

Grey Sensation easily took control in the stretch, with plenty to run on, of the Prix de Pont Vivaux in Lyon today. After placing seven times this year, Grey was finally able to get across the finish line first. After his 13th run this year, he solidified himself as the prize money leader at the stable of Gina Rarick and places himself well for the winter meeting coming up in Cagnes-sur-mer. 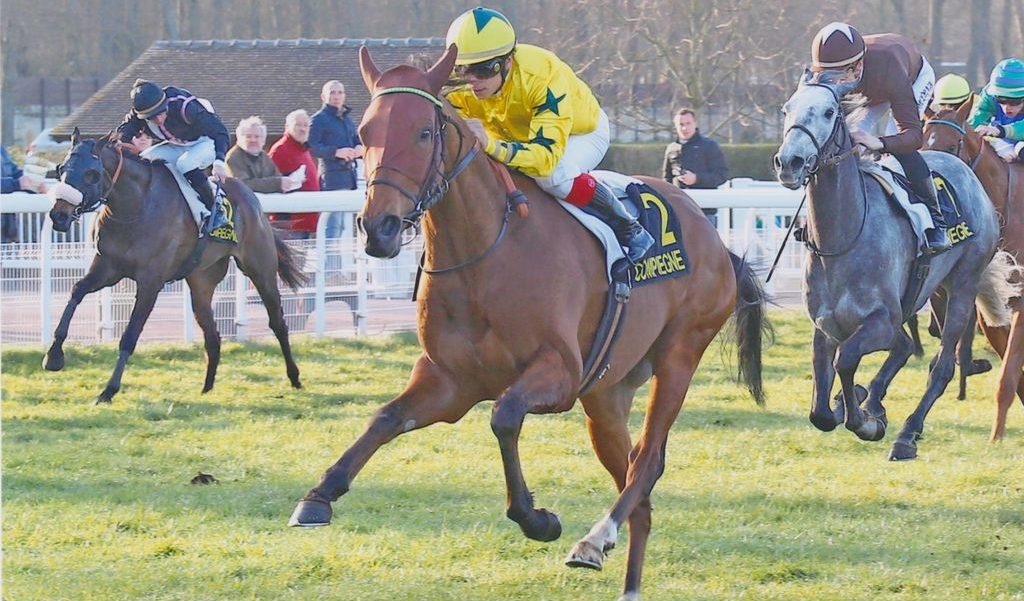 Grey Sensation (number 16 pictured above) earned his High Street Racing shareholders their first check at Cagnes-sur-Mer on Monday when he finished encouragingly to get up for fifth place in the 26,000-euro Prix de Roussillon, a 2000-meter (1 1/4 mile) handicap on the fibersand course.

Fifth place in the race was worth 1,300 euros, but more importantly was the style with which the 4-year-old son of Aussie Rules did it. Towards the rear for most of the way,the 12-1 Grey Sensation was short of room entering the 3-furlong straight. Gradually angled out by Alexei Badel, he was finishing fastest of all at the end, where he was just 1 1/4 lengths behind the winning favorite, Polkarena.

This was a performance that hearkened back to Grey’s third-place effort going 100 meters shorter at Deauville on Dec. 11, and had trainer Gina Rarick singing his praises.

“He’s a really consistent horse, a really nice horse,” she said., “and he loves this distance. My only regret is that he got stuck as the bottom weight (53.5 kilos, or 118 lbs.) in the second division of this handicap. But for one pound in the weights he would have been in the much easier third division, which he would have won.”

So there are a number of positives to take from Grey Sensation’s second outing for High Street Racing. Moreover, his handicap mark will remain the same after today, offering even greater encouragement for his next outing at the Hippodrome de la Cote d’Azur.

Bleu Astral disappointed his High Street Racing backers on Saturday as he faded to finish last of eight in the 17,000-euro Prix de General Saint Didier, a 1600-meter (one-mile) claiming race on the Cagnes-sur-Mer fibersand track.

Sent off at an unpromising 35-1 but away alertly under Guilain Bertrand in the amateur riders race, Bleu was soon tracking the leaders in third place, less than two lengths off a strong pace. After three furlongs he took the lead, but hopes were short lived as he fell back into third midway around the turn. Entering the straight he had nothing left, ultimately finishing 10 1/2 lengths behind the victorious Sterling Run.

“This was an extremely disappointing effort,” said trainer Gina Rarick. “He never took a breath during the race and he never relaxed. We’ll have to drop him into the lower claiming ranks now.”

A 2000-meter (1 1/4-mile) race fibersand later in the meeting could be Bleu Astral’s next start, although a return to soft or heavy turf, a surface over which he won twice last summer in Britain, might yet throw some light on the subject. For the moment, there is no turf race in the program for him.

High Street Racing’s Grey Sensation makes his second start of the Cagnes-sur-Mer winter meeting on Monday when he squares off against 15 rivals in the 26,000-euro Prix du Roussillon, a 2000-meter (1 1/4-mile) handicap on Fibresand.

Both trainer Gina Rarick and rider Alexei Badel were agreed that Grey was in need of a longer distance after his sixth-place finish last Saturday in a one-mile handicap. In his previous start at 1900 meters (1 3/16 miles), he had run what was probably his best race to date when finishing strongly to be third in a 1900-meter (1 3/16-mile) handicap.

So a return to about 10 furlongs should prove beneficial.

Bleu Astral makes his third start for High Street Racing at Cagnes-sur-Mer on Saturday, but his first in the syndicate’s yellow and green colors, when he goes in a 1600-meter (one-mile) claiming event worth 17,000 euros on the Hippodrome de la Cote d’Azur’s fibersand track.

Entered for a claiming price of 20,000 euros, the Astronomer Royal 4-year-old will be making his third start for trainer Gina Rarick. An improved effort last time in a similar event over an inadequate 1300 meters (6 1/2 furlongs) saw him finish ninth of 15, beaten by just 6 lengths. Further improvement is expected on Saturday when he returns to his favorite distance of a mile, over which he won his last two races in Great Britain in August.

Following a 14-hour van ride accompanied by his High Street Racing stablemate Grey Sensation and four other Gina Rarick trainees, Bleu Astral arrived in Cagnes last Friday morning and has settled in well. A sharp Wednesday morning workout on the main track with Ray of Hope, a two-time winner at Cagnes-sur-Mer last winter, sets him up well for this contest.

Bleu Astral will carry the the number three saddlecloth and break from post 2 in the race for amateur riders. Mr. Guilan Bertrand will be in the saddle for the first race on the card with post time scheduled for 12:45pm (11:45 am GMT); 7:45 am (EST).

Grey Sensation came home sixth of 15 in his Cagnes-sur-Mer debut on Saturday in the 1600-meter (one-mile) handicap, the Prix du Val Carei on Fibresand. Towards the rear after breaking from an unfortunately wide number 12 draw, he made up some late ground to get within 2 1/4 lengths of the victorious Bucentaire, who covered the distance in a quick 1:38.18.

Sent off as the 2.40-1 favorite on the opening day Cagnes card, Grey Sensation was perhaps compromised by a fast early pace and the relatively sticky ground produced by the new Fibresand course at the Hippodrome de la Cote d’Azur. The sharp pace of the race was confirmed in the next event, a good conditions race which was run .26 of a seconds slower than Grey Sensation’s.

Trainer Gina Rarick said: “The way he ran today shows he’d be more comfortable at 2000 meters (1 1/4 miles), and Alexis Badel agreed. He may go next in a handicap at that distance on Jan. 25.” In his previous race last time race at that distance, Grey Sensation had finished a fast finishing third at Deauville. A return to what appears to be a distance he now finds preferble should result in an improved effort.

Grey Sensation will debut High Street Racing’s new yellow and green colors on opening day of the Cagnes sur Mer winter meeting on Saturday when he takes on 14 rivals in the Prix du Val Carei. The 1600-meter (one-mile) handicap, with a value of 19,000 euros will be a drop down in distance for ‘Grey’, who will carry co-highweight of 60 kilos (130 lbs.).

Trainer Gina Rarick was unconcerned on both scores. “He’s run well at this distance in the past and the weight will not be a factor as there is only 3 lbs.separating top from bottom.”

Alexis Badel returns to the saddle on Grey Sensation, having ridden him twice before but not last time when he finished a strong closing third in a 1900-meter handicap (one-mile, 1 1/2 furlongs) at Deauville. Grey Sensation will break from the 12 post in the 15-runner field. He was scheduled to arrive at Cagnes sur Mer early Friday morning after a 14-hour van ride from Maisons-Laffitte along with High Street Racing’s second horse, Bleu Astral, and four other Gina Rarick trainees. The fourth race on Saturday’s card, the Val Carei will go off at 2:15 pm (1:15 pm GMT, 8:15 am EST).

High Street Racing twin standardbearers, Bleu Astral and Grey Sensation, are headed to Cagnes-sur-Mer for the winter meeting at the Hippodrome de la Cote d’Azur, where the syndicate’s brand new yellow and green colors will be unveiled on Saturday.
The occasion will be the Prix du Val Carei, a 1600-meter (one-mile) fibresand handicap worth 19,000 euros in which Grey Sensation will fly the High Street flag. A fast closing third in his last start in a 1900-meter (one-mile, 1-1/2-furlong) fibresand handicap at Deauville on Dec. 11, the Aussie Rules 4-year-old has maintained his form over the Maisons-Laffitte gallops since then and a good effort is expected in his Cagnes debut.
Both Grey Sensation and Bleu Astral will be loaded into the van for the 945-kilometer (547-mile) trip south on Thursday afternoon along with five other Gina Rarick trainees. The team is scheduled to arrive at Cagnes between 6 and 7 a.m. on Friday.
“Both horses are training well,” Gina reports. As for Bleu Astral, “His objectives are a claiming race on Saturday, Jan. 23 and a conditions race on Monday, Feb. 22. He’ll have another one in between those two somewhere.”
Both horses worked on the straight gallop Saturday morning, and both showed they were ready to race. “They’ll get one more work before getting on the truck as long as the weather leaves the track in good shape. If not, they’ll shipp off this work and stretch their legs down south.”